Throughout the novel Mean by Myriam Gurba, the author tells various stories about her childhood all revolving around this idea of being “mean.” Most children, including myself, have been taught to be nice to everyone no matter what yet she learned at a young age the complete opposite idea and in hindsight that may not be such a bad thing. Being mean has such a negative connotation when most of the time it is used as a method of self defense.

It seems that the nicer you are, the more people feel obligated to take advantage of that kindness and walk all over you. Being mean is the only way to make sure everyone knows they can’t treat you like that. Gurba states, “We act mean to defend ourselves from boredom and from those who would chop off our breasts. We act mean to defend our clubs and institutions. We act mean because we like to laugh. Being mean to boys is fun and a second wave feminists duty. Being rude to men who deserve it is a holy mission. Sisterhood is powerful, but being a bitch is more exhilarating. Being a bitch is spectacular” (17). This is such an important quote because it just goes to show you that meanness can in fact be a good thing. If you don’t stand up to people who are blatantly rude to you then they will feel perfectly fine treating you like that all over again. The world can be a cruel place, especially today with social media.

Sexual harassment comes in many forms such as disturbing comments left on Instagram. We see celebrities receiving comments like these daily and it has been so normalized that nobody even talks about it. Some of our favorite singers can’t post a decent picture without having some old man comment about how hot they look in the most derogatory manner. These are the type of people that won’t stop unless meanness is applied. I find it ironic that even people who are looked up to and are so important in society still live with harassment like this. This in a way reminds me of Gurba considering she has such a loud personality and has no trouble speaking her mind, yet once she begins to get sexually harassed by Macauly she refuses to open her mouth. Gurba states, “I looked at Macaulay with caution. This trepidation was knew but felt natural. Instinctual. I knew that what was happening under the table shouldn’t have been happening, but my impulses did not command me to fight. I froze. Many animals do this. Deer. Possum. My mother” (25). She knew she didn’t want that to continue but she didn’t know what to do about it. That is truly a traumatic experience and it is difficult to say something in that moment since you’re in shock and afraid. This would’ve been the perfect time for her to be mean and insure that he never lays his hands on her again but she couldn’t get any words out. This could go hand in hand with the fact that he was once her friend. Statistics show that eight out of ten victims of sexual assault knew the perpotraitor. This could also have to do with the fact that she is Mexican and maybe felt hopeless, even to go up to the teacher and ask for help.

In conclusion, being mean is important and a way to defend yourself from the creeps of the world. It portrays you as being someone who is strong and someone that nobody should mess with. Nice people are easy targets and it is unfortunate that is what our world has come to. Gurba does an excellent job providing us with examples that support this claim, showing how brutal life can be. 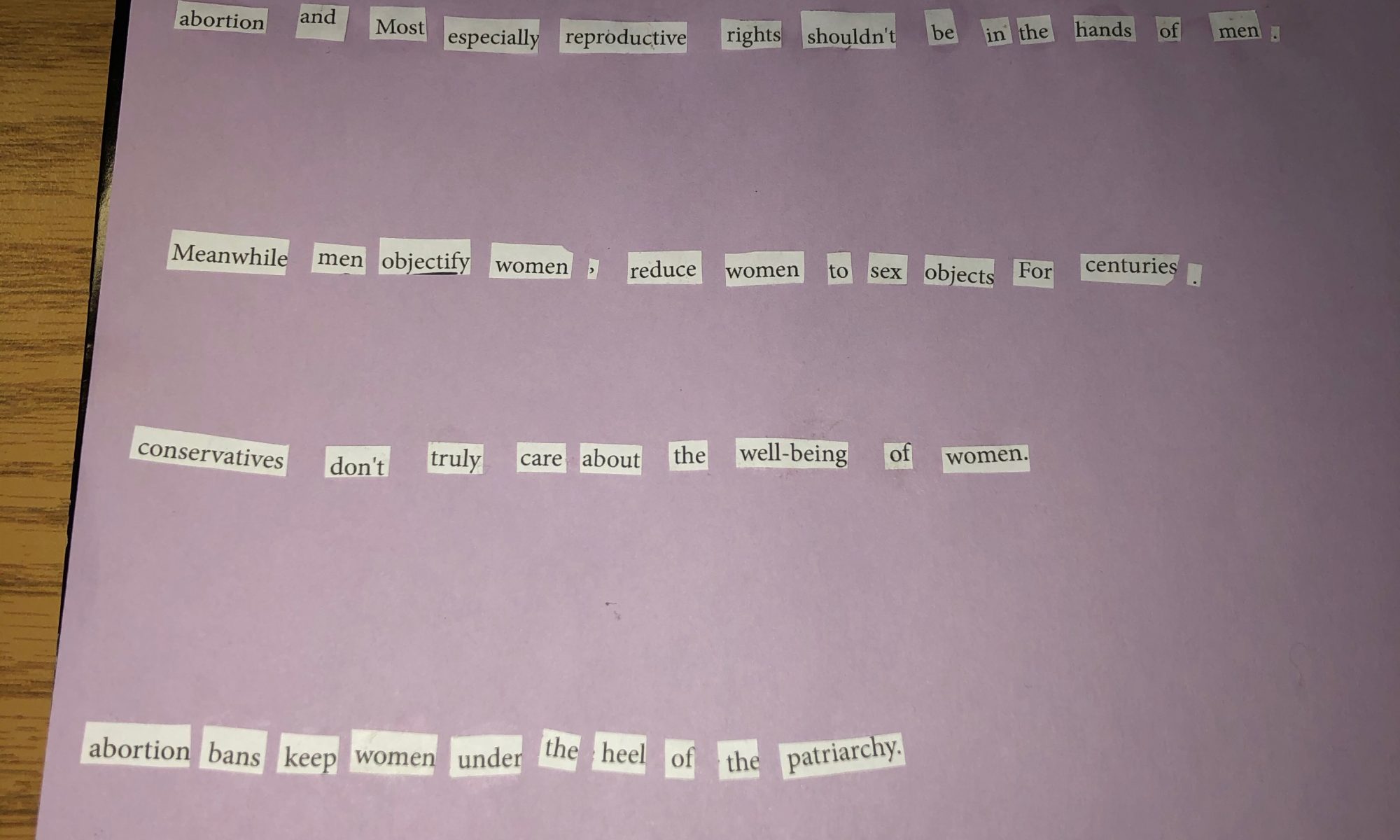 I chose to talk about the very controversial topic of the ban on abortion. The article I read talked all about how a pro-life world is good for women. This got me pretty angry considering society is once again trying to tell others what is good for them. How can something that takes away rights to my own body be good for me? I should be the one deciding what I want to do with my body but instead men are. The way I formatted my poem was to make the last word stand out so I made each line shorter than the last basically leading your eye right down to the final word, “pro-woman.”

This project was a lot harder than I thought it would be because I had an idea of what I wanted to say but I had a limit on the things I could actually say since I had to use someone else’s words. It was also challenging since we had to make it about the complete opposite claim the article stated. It was still a lot of fun to make and I really enjoyed comparing the article to the poem because they are so different. Creating this one page took me a good amount of time so I can’t imagine how long it took to create something like Zong!

I am so glad I got to experience an event like this, especially since I had no prior knowledge of Toni Morrison or any of her works. I also enjoyed hearing different things from each speaker and the effect her stories had on them individually. The first speaker talked about the impact reading these books had on him and the connection he made with his culture. He learned to understand his background and how to be conscious of who he truly is.

Hearing all about how this author leaves you wanting more and wondering what happens next, learning to be okay without this closure most books give to the reader makes me want to find one of her best books and read it for myself. It is clear that Morrison is a feminist and hearing another speaker talk about how she writes about female friendship and fear of how powerful women become once they come together. The inspiration this author had on all the speakers at this event reflects how good of a writer she truly was. Another speaker talked about a student he had that didn’t grasp the story he had read but loved the discussions they had after. He said all that matters is that you are able to be transformed by the challenge the story brings forth. Another student was shocked by the graphics of this story and he said to her that nonfiction presents the surface, fiction like this gets to the heart. This event was so informative and I’m very happy I went.

Hi everyone my name is Lauren and I’m from Long Island. My major is Speech and Hearing Science, I really want to work at a school helping little kids after I finish college! I am unfortunately a middle child but also the only girl so it balances out. I love listening to music, going to concerts, and I definitely want to try and learn to play an instrument. I’m looking forward to this semester and to meet all of you!!