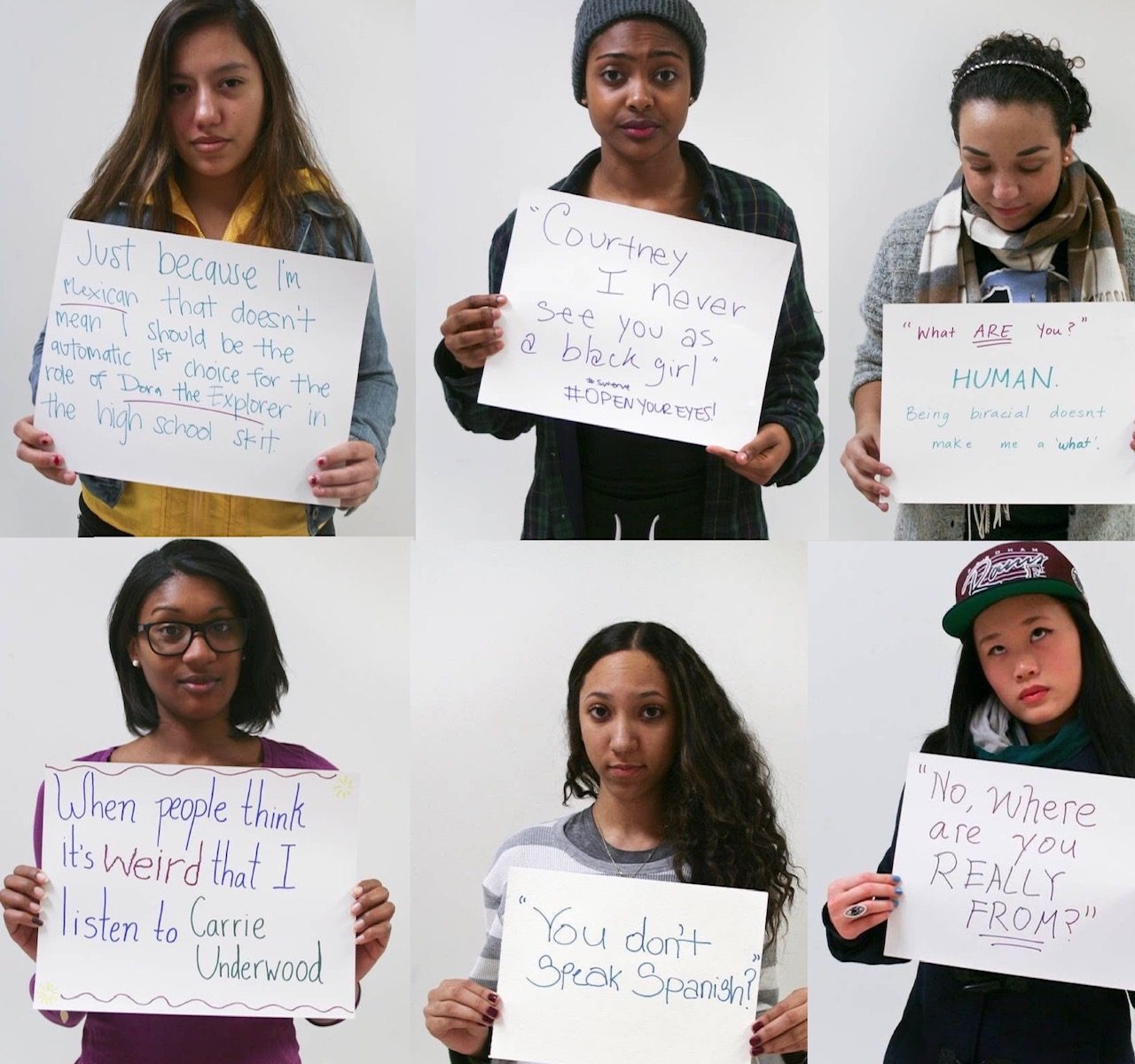 Microaggressions: A statement, action, or incident regarded as an instance of indirect, subtle, or unintentional discriminatioin or prejudice against members of a marginalized group such as a racial minority (“Microaggressions”).

Micro-meaning small or often microscopic, Aggression-meaning an unprovoked attack. The term was coined by American psychiatrist Chester M. Pierce. Its first known use was in 1970 Since then, the word has been used to refer to instances in which someone expresses prejudice ideas against a marginalized group (Deangelis, Tori).

How this term can help us read literary texts in a more nuanced way:

Microaggressions are typically the subtle verbal and nonverbal racist comments, that most of the time go unrecognized. Since not all people experience microaggressions on a day to day basis, reading literary texts that involve this term helps those who do not experience the issue get a better understanding of its detrimental effects and the more subtle undertones of a texts that commentate on racism.

Citizen: An American Lyric by Claudia Rankine is a provocative study of race in the United States. The 2014 book is a criticism of American society through the use of boundary pushing poetry. Throughout the chapters, Rankine details the microaggressions her and her friends have experienced in order to express the way these encounters with subtle racism were hurtful. As well as this, Rankine explores other forms of racism such as systemic racism and police brutality. Citizen innovatively blurs the dividing lines of poetry and prose to expose the racism in the everyday lives of Black Americans.

Microaggressions are important to recognize in literature, as they often have serious ramifications in the real world. The real world ramifications are that microaggressions often cause an astronomical amount of stress and anxiety that can go unnoticed by many. In fact, being a black woman in America leads to having a higher risk of giving birth to a premature baby. This is due to the discriminatory practices that are built through microaggressions, such as black women not being able to get an equal education, housing discrimination, and overall not being paid as much as their white counterparts. As well as this, the stress of dealing with microaggressions can lead to stress during the labor process, which endangers the child (Chatterjee, Rhitu). Seemingly miniscule moments of subtle racism can lead to a lifetime of pain and worry.

Examples of microaggressions are employed throughout Citizen. Claudia Rankine helps non black readers gain insight into what it feels like to experience the humiliating consequences of microaggressions. Rankine lets a student cheat off of her and the student tells her “You smell good and have features more like a white person” (5). In this instance, Rankine is forced to take the comment as a thank you, in order to defend herself from the reality that this classmate sees her as undeserving of gratitude due to her race. As well as this, her teacher treats her as less valuable than the other students due to her race “Sister Evelyn must think these two girls think a lot alike or she cares less about cheating and more about humiliation or she never actually saw you sitting there” (Rankine 6). Rankine’s teacher also sees her, as well as her situation as being unworthy of recognition. Microaggressions are common in the medical field and Rankine experiences one when she visits a trauma counsellor “When the door finally opens, the woman standing there yells, at the top of her lungs, get away from my house! What are you doing in my yard?” (Rankine 18). The counsellor never once thought that a black woman would need help with her mental health. Due to stereotypes like these being held by professionals, black women are less likely to be helped and treated. In addition to not believing that a black woman could be there for an appointment, the counsellor assumed that because of Rankine’s race, she must be dangerous. The assumption that Rankine is an intruder is a racist stereotype within itself. This assumption is not only insulting to Rankine, but puts her life in danger. She could be forced to have an encounter with police who are looking for a problem that does not exist. These examples of microaggressions in the young life of Rankine, her friends and colleagues, and in the medical field help to portray their nasty consequences.

All throughout Rankine’s lyric Citizen, readers get an insight on the prejudice experienced by members of minority groups. The stereotypes and racist incidents displayed are just a few of the things society has taught people to think are acceptable to think and say. We as readers need to take a closer look at the events that scream discrimination, but are often played off as nothing. We see that not only are microaggressions totally unacceptable simply because they are offensive, but we see how they also can affect a person’s physical state.

Microaggressions can be perpetrated by people who do not see themselves as holding racist beliefs. They can be perpetrated by those who are close and well known to the victim. For example, a friend mixes you up with another person of the same race, and only sees an issue with it when confronted. Rankine takes issue with one of her own friends when they say “You are late you nappy headed ho” (Rankine 41). Rankine replies by asking her friend to repeat herself , “‘What did you say?’ She doesn’t, perhaps she physically cannot, repeat what she has just said” (41). The friend was oblivious to the fact that addressing Rankine as a “nappy headed ho” would be something she might find degrading. Until Rankine calls her out, she saw the name as something that was funny, rather than rude and stereotypical. In this particular situation, Rankine stood up for herself, hopefully forcing her ‘friend’ to think about the things she says in the future. In some cases individuals accept this kind of behavior and move on, choosing to believe that it is not their responsibility to educate others.

The next section of Citizen revolves less around specific experiences, but the effect they have on individuals. Rankine discusses the role the past and memory plays in all of this, and the way experiences can impact a person. She talks about the way individuals try and cope with the microaggressions they’re handed, but how eventually everything just feels numb “The head’s ache evaporates into a state of numbness, a cave of sighs” ( Rankine 62). This supports the idea that constantly being faced with discrimination and microaggressions can have a physical toll on a person.

There are many different forms of microaggressions scattered throughout the book, but not every chapter includes examples that Rankine has experienced. Rankine states “Words work as release—well-oiled doors opening and closing between intention, gesture. A pulse in a neck, the shiftiness of the hands, an unconscious blink, the conversations you have with your eyes translate everything and nothing” (69). The beginning of this chapter, seems almost as if Rankine is talking to someone, but she is talking to herself. Rankine explains her emotions through her tone, by voicing her opinion and using language to represent an internal conflict. There is a loss of self- identity within this book because of the way Rankine utilizes the word “you”.  Rankine says “You begin to move around in search of the steps it will take before you are thrown back into your own body, back into your own need to be found” (70). This quote details what it’s like to lose your own sense of self and identity, the “you” makes it as though the reader is the one who has lost themselves due to an overwhelming feeling of dread.

Groups of people including the LGBT community, those with disabilities, religious groups, and women are dealing with microaggressions for just being who they are “Those realities include the acts of everyday racism—remarks, glances, implied judgments—that flourish in an environment where more explicit acts of discrimination have been outlawed” (Wing Sue, Derald) In his article, Dr. Sue includes examples of microaggressions that are used on a day to day basis, which include remarks of people who are being judged on other qualities other than race. An example of a gender microaggression that he uses this would be “Whistles or catcalls are heard from men as a woman walks down the street” (Wing Sue, Derald). In this very common case, women are being treated strictly as a sexual object based off of their appearance. An example of a sexual orientation microaggression would be a young person using the term “gay” to describe a movie that they didn’t like. In this instance, the word gay is being used as a synonym for something that is bad. This reinforces the idea that being gay is bad. Society has normalized all of these occurrences because they happen so often, which is why there needs to be more thoughtfulness surrounding the language we choose to employ  (Wing Su, Derald).

Microaggressions will continue to exist among us in today’s society if no awareness is brought to them.  Rankine raises awareness toward microaggressions by pinpointing the little remarks that are made to her, and to others. By Rankine writing about these different situations, she is bringing situations to light that otherwise would go unnoticed. She is helping those who are unaccustomed to become more familiar with the everyday struggles of others, by making the reader use empathy and step into another persons shoes.

Chatterjee, Rhitu, and Rebecca Davis. “How Racism May Cause Black Mothers To Suffer The Death Of Their Infants.” NPR, NPR, 20 Dec. 2017,